How the funds of the state security of Georgia were spent

Saakashvili is again on trial. On Monday, November 15, a hearing was held in the Tbilisi City Court on the case of embezzlement of money from the budget in the amount of more than $ 2.7 million. The Ministry of Justice of Georgia again refused to bring the accused to court, citing considerations of his safety. “MK” has repeatedly written about this case, which is popularly called “jacket”. In addition to his jackets, President Saakashvili spent public funds on watches, botox, health resorts, training his sons, his wife's travels, etc. etc. 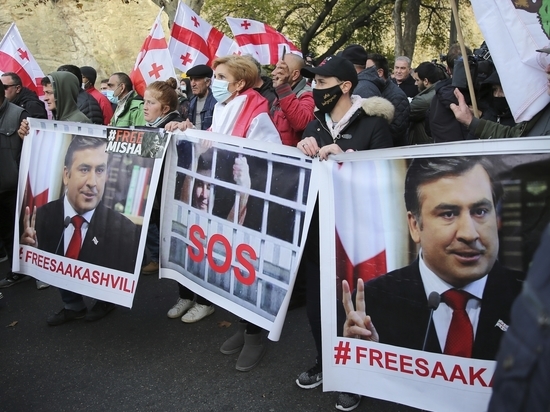 In addition to Saakashvili, the case involves the former head of his security, MP Teimuraz Janashia. The fact is that funds from the fund of the Special State Security Service were spent on the personal whims of the president, his family and entourage. The expenses of this fund were classified, which was justified by reasons of state security.

Among the supporters of the Georgian opposition, it is customary to make fun of this case. Just think, the president bought himself several jackets for the state account. But, first of all, we are talking not only about jackets, and the amount eventually accumulates impressive. By the way, earlier in the statements of the Georgian prosecutor's office a different figure sounded – not $ 2.7, but $ 5 million. Secondly, the representation expenses of the head of state have already been included in the budget. During the same period, from 2009 to 2012, the State Support Service quite legally spent $ 11 million on Saakashvili.

The ex-president was charged with embezzlement of funds from the fund of the Special State Security Service on August 13, 2014, a year after the Georgian prosecutor's office removed the “secret” stamp from the documents. From the declassified accounts, it became clear that it was from the budget of this power structure that Saakashvili spent large sums on personal needs: renting hotels, paying for the services of masseuses, purchasing expensive gifts for women. In particular, he paid for the services of the Spanish chef Sergio Calderon Latas and his translator, for which 191 thousand 643 lari (about $ 110 thousand) were spent. 75 thousand 181 lari (about $ 43.4 thousand) went to the stylist of Mikhail Saakashvili Ali Kamal. For weight loss courses in Innsbruck for the former mayor of Tbilisi Georgy Ugulava – 26 388 GEL (15 thousand dollars), for rent for Saakashvili and Ugulava in Austria cars “Porsche”, “Mercedes” and “Audi” – 58 876 GEL (34 thousand dollars) , to rent an aircraft for Saakashvili – 503 383 lari (293 thousand dollars).

In Great Britain, Saakashvili bought 7 jackets and a cashmere sports coat at the expense of the state. This cost the treasury about $ 28.6 thousand. Acquisition of ten watches in the same place cost the budget $ 30.7 thousand. In the Phuket resort in Thailand, Saakashvili, former speaker David Bakradze and Levan Varshalomidze spent 127 thousand 858 lari (about $ 73.9 thousand) in two days.

Saakashvili paid for the education of his sons in America and travel his wife, Botox injections in an American clinic, gifts for women. In particular, gold jewelry was purchased for the Russian journalist Ksenia Sokolova and the young deputy of the Georgian parliament Mariam Sajaya.

The same Sajaya, as well as a former employee of the presidential administration (and, according to rumors, a former favorite) Alana Gagloeva, were paid for a hotel in the United Arab Emirates. Other spicy expenses were the purchase of a painting by the artist Meredith Ostrom, painting with her breasts, as well as several tens of thousands of dollars spent on the procedures of the masseuse Dorothy Stein, who was specially invited to Georgia in 2009 for this. At the same time, it did not officially cross the borders of Georgia. Her visit became known only from publications on her blog, where she posted photos with the president.

For all this love for the beautiful Saakashvili, now 11 years of imprisonment threatens. The next hearing on the case will take place on December 2. It should be reminded that at present he is also being accused in the case of dispersing an opposition rally and routing the Imedi TV company. And he has already been convicted in the cases of the murder of a bank employee Sandro Girgvliani and the beating of parliamentary deputy Valery Gelashvili. In total, he has received 6 years so far.