What's going on in the city near the Zaporozhye NPP

On Thursday, the IAEA commission is expected to arrive in Energodar, where the Zaporozhye NPP is located. From the Ukrainian side, shelling of the city, its outskirts, as well as the station itself does not stop. Representatives of the former Kyiv administration of Energodar are spreading information about panic and the most difficult situation in the city, because of which residents almost flee towards Ukraine. “MK” tried to figure out what is really happening in Energodar. 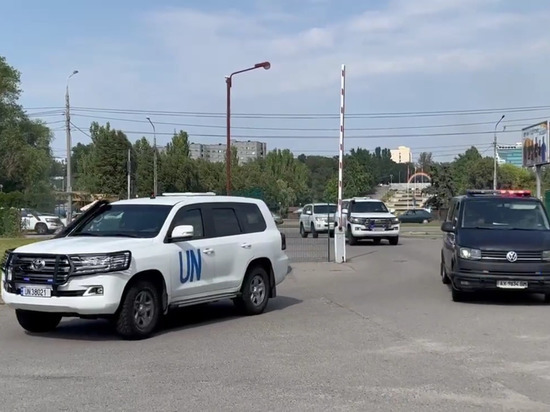 On the eve of the arrival of the international delegation, more than 60 strikes were carried out in the city and the ZNPP. One of the drones caused damage to the administration building of Energodar. The city's leadership even intends to donate a collection of fragments from Ukrainian shells to the IAEA mission.

Apparently, Ukraine was preparing a surprise for the arrival of the IAEA mission. On Wednesday, a group of saboteurs was detained in the city, which, according to Russian law enforcement agencies, was preparing a series of terrorist attacks at the ZNPP. The group had with them data on the design features of the power plant, which allowed it to strike in the most unprotected place. However, they were neutralized even before the terrorist attack…

Peaceful life, meanwhile, continues. Preparations for the new academic year are in full swing. On the eve of September 1, general meetings were held in schools. Photos of full halls of parents and children show that people are not going to leave the city yet. The art school even announces a new enrollment, promising to show the World of Fairy Tales to the guests on September 1st on Open Doors Day. By the beginning of the school year, under constant shelling, they even managed to build several playgrounds by installing slides and swings made in Voronezh.

And this despite the fact that people live in a state of permanent collapse. Dozens of residential buildings, including schools and kindergartens, are left without hot water supply as a result of the shelling of the main pipeline on August 28-29. Residents of Energodar also face power outages, as strikes near the station sometimes lead to short circuits and the operation of ZNPP security systems.

More and more people are talking about what will happen if something happens to the Zaporozhye NPP. They don’t want to believe in bad things, but they think about it. Local resident Olga explains that she has not heard anything about the distribution of any iodized tablets, as well as about the great demand for iodine, and fears among Energodar residents are caused more by artillery strikes of the Armed Forces of Ukraine than the likelihood of a repeat of Chernobyl.

“I I've been living here for a long time, twenty years to be exact. There have been fewer people in the city in recent months, they are leaving, but, it seems, I heard that someone is already returning, ”the woman says. At the same time, she herself is not going to leave Energodar. “There are medicines in pharmacies, although not all of them are necessary for me. The store shelves are not empty. There is shooting here, but I am at home. And who knows what will happen to me and where I will end up.

Not all citizens agree to give information about what is happening. Probably information terror from Kyiv had consequences. In the pro-Ukrainian Telegram channels, the activities of the so-called “partisans” in Energodar are replicated, who write down everyone who somehow fell under suspicion as a “collaborator”. The data of ordinary people are leaked to the network, and then they begin to receive threats.