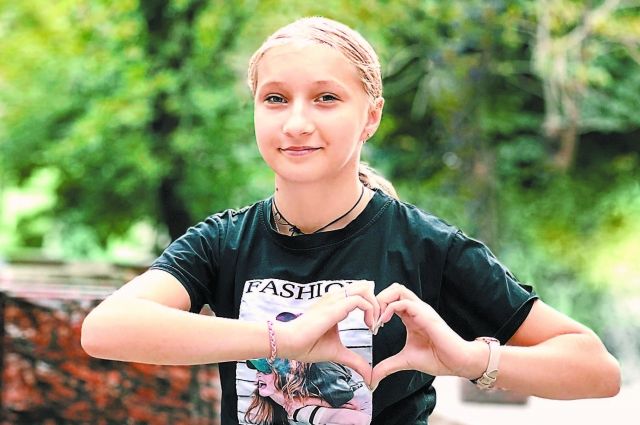 To help one heart, sometimes you need the warmth of many thousands of hearts. Giving, we do not just change someone's life, but help to reach the dream: to see the sea for the first time, go to study in a regular school, or even move to another city. Now there is a new job for our hearts.

Nastya Radostevathinks that she needs a heart operation so that painful fainting spells end and she can leave her native mining town of Osinniki for Novokuznetsk to study as a logistics specialist (the exams have been passed, she is already on the list of applicants). “How can I tell her the whole truth? And is it necessary?» – says Nastya's mother Anna. The thing is that this operation – Nastya's last chance. A next – only a heart transplant. There is no money for this very last chance in the family.

Before enrolling in 1st grade, Nastya was an ordinary girl. Maybe too thin, too calm. And then, at the medical examination, the cardiologist heard noises in her heart: “It would be nice to examine the child.” A couple of months later, the first fainting happened.

«Nastya was visiting grandmother. She asked for water, took a sip – and here she is already lying on the blue floor, shaking all over. Her eyes are open, but she can't see or hear anything. Thanks to the neighbor who worked in the Ministry of Emergency Situations. Grandmother called him, and he immediately flew in with a rescue team. Nastya was injected with an anticonvulsant drug, an ambulance was called, – Anna tells.

Then there were a lot of other fainting spells. At home, at school, on the street. They continued when, after an examination in Tomsk, the girl was prescribed blockers, and when she was implanted with a defibrillator.

Sometimes passers-by approached Nastya lying on the sidewalk, took out her mobile phone from her bag and called Anna: “Your daughter fainted at the tram stop, run here as soon as possible.” Sometimes – passed by, and Nastya came back all covered in snow and tears, with frost-frozen fingers.

From Nastya's number, her mother received many calls from strangers, friends, and teachers. Anna is always afraid to hear an unfamiliar voice instead of her daughter's. What will they say to her now? Perhaps it's too late and they haven't made it to their last chance? You won't keep your daughter under lock and key either. What will it change? «This is not the disease when he gave the pill – and everything is gone. During the next attack, I look with horror at my child and understand that there is nothing, absolutely nothing I can help.

It so happened that the implanted defibrillator shocked Nastya with such force, as if the fist of an adult man hit her chest with a swing. But it was impossible not to put the device.

The first defibrillator only lasted five years – he just worked for wear and tear (so often Nastya's heart tried to stop!). As a result, the shock electrode failed. Attacks became not only frequent, but also very painful. Nastya could shake and roll head over heels down the flight of stairs or lose consciousness while crossing the road with her mother. «It's good that   you are small & light) – – Anna said, grabbing her daughter in her arms, hugging her and feeling the electric discharges inside her body with her hands.

Then they put in a new defibrillator, but the fainting spells returned again and began to be repeated more and more often. First 3 4 in year, then 3–4 in month, and once Anna counted 10 attacks per day.

“By that time, I had quit my job at Vodokanal and sat at home with my daughter, because Nastya was afraid of being alone to the point of panic. She didn't even let me go to the store. The eldest son, who helped me with & nbsp; sister, went to study in & nbsp; Novosibirsk, we were left alone.

Recently, Anna found out that on medicines and a defibrillator her daughter has negligibly little chance not only of a full life, but in principle – for life. And heart denervation – their last hope. Only they don't do it for free.

Now Nastya – a student at a boarding school for teenagers with disability. There is an on-duty doctor and panic buttons to call him. But mom is still scared to let Nastya go to another city. And it's scary to leave her at home, because it won't change anything at all. There is no saving pill.

Only surgery will help Nastya. And people who stop will not pass by…

Head of the Department of Clinical and Interventional Arrhythmology, NIKI of Pediatrics. Veltishcheva Vladislav Solovyov:

– Against the background of antiarrhythmic therapy, Anastasia experiences multiple cardioverter-defibrillator (ICD) trips. They are fraught with the development of a life-threatening condition – “electrical storm”. The patient is indicated for selective left-sided thoracoscopic sympathectomy, which will reduce the risk of repeated ICD triggering and the development of sudden cardiac arrest.

Please don't forget to  confirm the payment by reverse SMS!

By card — in the “How to help” section at dobroe.aif.ru.

By making a donation, you consent to receive information messages.

AIF. Good Heart” helps children and adults with severe and rare diseases. We provide medical, legal and psychological support to wards from the most remote regions. By supporting the foundation, you help not only them, but also their families!