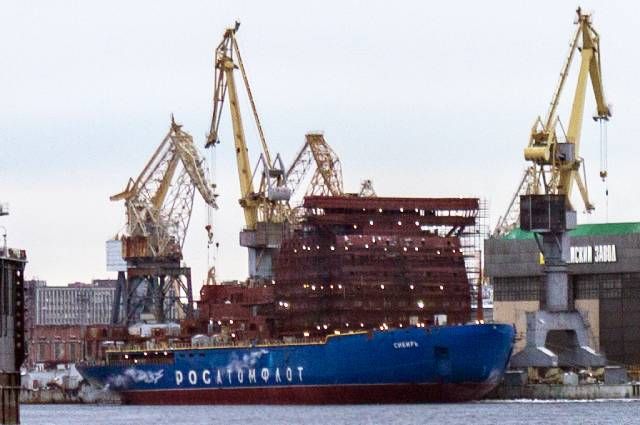 Petersburg Baltic Plant (part of the United Shipbuilding Corporation) launched the first serial nuclear-powered icebreaker of the Arctic type: Siberia for sea trials. Experts will check the operation of the vessel's mechanisms and equipment and test its speed and maneuverability.
& nbsp;
Universal nuclear icebreaker Siberia & mdash; the second vessel of project 22220 under construction at the Baltic Shipyard. Its laying ceremony took place on May 26, 2015. Launching took place on September 22, 2017. On November 16, the first serial nuclear-powered icebreaker left the outfitting embankment of the Baltic Shipyard. and headed for the Gulf of Finland, where he will begin a program of factory sea trials. This is the second stage of testing any ship. It checks the onboard equipment in real conditions and the compliance of the vessel with design characteristics, such as speed, stability and propulsion.
& nbsp;
The next three weeks, the commissioning team of Baltiyskiy Zavod together with representatives of contractor organizations, he will check the operation of the mechanisms and equipment of the icebreaker. Experts will conduct a set of tests, including checking the operation of the steam turbine plant, the ship's electric propulsion systems, shafting and deck mechanisms (anchor and steering gear). The speed and maneuvering characteristics of the icebreaker, the functioning of general ship systems and automation systems will be tested.

The vessel will be tested at the ranges of the Gulf of Finland and Vyborg, to check the anchors the icebreaker must go to Gogland to a depth of 120 meters.

The universal nuclear-powered icebreakers of Project 22220 are the largest and most powerful icebreaking ships in the world. Their main task is & mdash; providing year-round navigation in the Western region of the Arctic. The vessels of this project are to become the basis of the Russian civilian icebreaker fleet in the coming years.

Icebreakers of the “ Arctic '' type being built for Rosatom according to the project 22220. There are three of them in total, with a displacement of 33.5 thousand tons with a length of 173.3 meters, a width of 34 meters and a height of 15.2 meters. Minimum draft of icebreakers & mdash; 8.55 meters & mdash; allows them to pass along frozen river beds, and the maximum & mdash; 10.5 meters & mdash; break through thick ocean ice. The ships are equipped with RITM-200 two-reactor nuclear power plants. power of 60 megawatts on the shafts. Each reactor will have a capacity of 175 megawatts.

The world's largest icebreaker is controlled by a sophisticated automation system. It was thanks to the automation that it was possible to reduce the number of the ship's crew. For comparison: the crew of the icebreakers of the project 10521 is 133 people, and the nuclear-powered ships of the project 22220 & mdash; only 54.

These icebreakers will be able to navigate convoys of ships in Arctic conditions, breaking through ice up to three meters thick. They will provide pilotage of vessels with hydrocarbons from the fields of the Yamal and Gydan peninsulas and from the shelf of the Kara Sea to the markets of the countries of the Asia-Pacific region.

Head Arctic launched in 2016, and last fall it became part of the Russian icebreaker fleet. True, with a faulty propeller electric motor, which is why the ship went for repairs in August.