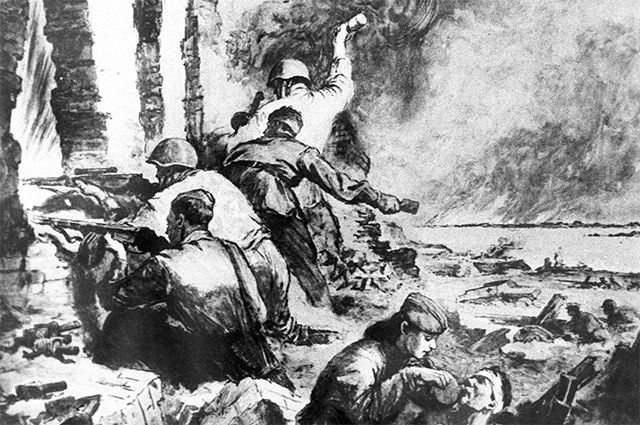 On July 27, 1942, at 23:35 Moscow time, Alexander Vasilevsky, Chief of the General Staff of the Red Army, entered the office of Joseph Stalin. The leader gave the order to immediately prepare an order to strengthen discipline in the troops.

Four hours in the Kremlin office

Vasilevsky wrote the draft document right here, without leaving his office, and handed it over to Stalin. He picked up a pen and started editing. In the final version, only general phrases remained from the version of the Chief of the General Staff. The essence, the toughest turns, belonged to the authorship of the Soviet leader.

At 4 am on July 28, 1942, General Vasilevsky left the Kremlin, holding in his hands the signed Order of the People's Commissar of Defense of the USSR No. 227 “On measures to strengthen discipline and order in the Red Army and prohibit unauthorized withdrawal from combat positions.” Subsequently, he became known as the order “Not a step back!”.

The document is surrounded by a huge number of myths, the main of which, which appeared during the years of perestroika, read: Stalin, frightened by the flight of Soviet soldiers, ordered detachments to be deployed in the rear, which shot thousands of soldiers and officers. As a result, the soldiers of the Red Army fought not due to their own courage, but driven by fear of bullets in the back.

This version then migrated to Hollywood films (like the Enemy at the Gates tape), and then to the new Russian cinema about war.

“For a whole hour, stunned, silent after reading the order”

However, people who went through the war assessed Order 227 far from being so negative. For example, General Vasilevsky in his memoirs, written far from Stalin's time, defined his attitude to the document as follows: “Order No. 227 — one of the most powerful documents of the war years in terms of the depth of patriotic content, in terms of the degree of emotional intensity. I, like many other generals, saw some sharpness in the assessments of the order, but they were justified by a very harsh and anxious time. In the order, we were primarily attracted by its social and moral content.

Writer Konstantin Simonov, in 1942, a war correspondent for Krasnaya Zvezda, first heard the order along with the soldiers at the front.

“For a whole hour, stunned, they were silent after they read the order,” he wrote in his diaries. — Before that, the war was wound up like a ball, at first like a ball of misfortunes, then, in December forty-one, this ball seemed to begin to unwind, but then it began to be wound again, like a ball of new misfortunes. And suddenly, when I read this order, everything seemed to stop. Now the movement of life seemed to be some kind of leap in the future — or jump over, or die!»

Perhaps for the first time since the beginning of the war, such harsh words were heard in the order, stating the depth of the failures that had befallen the country and the army: “The population of our country, with love and respect for the Red Army, is beginning to become disillusioned with it, losing faith in the Red Army, and many some of them curse the Red Army for handing over our people to the yoke of the German oppressors, while she herself flows away to the east. Some stupid people at the front console themselves with talk that we can continue to retreat to the east, since we have a lot of territory, a lot of land, a lot of population, and that we will always have an abundance of bread…  Territory of the Soviet State — this is not a desert, but people — workers, peasants, intelligentsia, our fathers, mothers, wives, brothers, children. The territory of the USSR, which the enemy has captured and seeks to capture, — these are bread and other products for the army and the rear, metal and fuel for industry, factories supplying the army with weapons and ammunition, and railways. After the loss of Ukraine, Belarus, the Baltic States, Donbass and other regions, we have much less territory, therefore, there are much fewer people, bread, metal, plants, factories. We have lost more than 70 million people, more than 800 million poods of grain a year and more than 10 million tons of metal a year. We no longer have superiority over the Germans either in manpower reserves or in grain stores. Retreat further — means to ruin yourself and at the same time ruin our Motherland… It follows from this that it is time to end the retreat. Not one step back! This should be our main call now… Alarmists and cowards must be exterminated on the spot… The commanders of a company, battalion, regiment, division, the corresponding commissars and political workers, retreating from a combat position without an order from above, are traitors to the Motherland. It is necessary to deal with such commanders and political workers as with traitors to the Motherland… Follow this call — it means to defend our land, save the Motherland, exterminate and defeat the hated enemy.

To understand the full depth of this order, one must clearly understand on what days it was signed. By the summer of 1942, the Soviet Union found itself in a much more catastrophic situation than in June 1941.

Over the abyss: in July 1942, the USSR was on the verge of destruction

The attack on Kharkov did not just fail, but turned into a complete defeat of the group of Soviet troops. Killed, wounded and captured, the Red Army lost about 500 thousand people. The Nazis managed to capture the Crimea, and Sevastopol fell in early July 1942.

German troops rushed to & nbsp; the Volga, capturing more & nbsp; new and & nbsp; new territories. On July 7, the Nazis broke into Voronezh, on July 23, Rostov-on-Don fell. The retreat of the Red Army seemed to have assumed an irreversible character. After reaching the banks of the Volga and capturing Stalingrad, the Soviet Union was deprived of strategic resources and communications. Worse, an enemy that broke through into the Caucasus could take possession of the oil fields of Grozny and Baku.

In the Great Britain, not really relying on the resilience of the Soviet troops, they were already considering the possibility of inflicting massive bombing attacks on the Soviet oil fields, so that they did not get to the Nazis.

In addition, the decisive success of the Nazis on the Volga and         the Caucasus was fraught with entry into war with the USSR Japan and                   In fact, the entire depth of the fall was set out in the order itself. Which, contrary to later myths, was not secret, but was marked “Not for publication.” It was read in the units — to those who were to stand in the way of the armored enemy armadas in order to stop their advance at any cost.

Who did the detachments shoot?

Three important points that are distorted today. Order 227 DOES NOT PROHIBITE RETREAT AS SUCH. The essence was to prohibit the withdrawal of disorderly, without orders from the command. Responsibility for this was assigned primarily to commanders and political workers, and not to ordinary fighters.

The detachments were not an invention of the Red Army. Such units were previously used in various armies of the world, and Order 227 itself directly indicates that the Germans stopped the flight from Moscow by forming penal companies and barrier units. And if it worked for the enemy, then why not use his experience?

Now, as for the “mass executions”. Here is a summary of the NKVD of the USSR on the Don Front on the activities of detachments in the hottest period — from August 1 to November 1, 1942. In total, during this period, detachments detained 36 & nbsp; 109 soldiers and & nbsp; officers who had fled from the front line. 32 993 persons were returned from to their units and to transit points they were sent to penalty companies — 1056 people sent to penal battalions — 33 people, arrested — 736 man, shot — 433 people. That is, less than 1% of those who left their positions fell under the death penalty, and most simply returned to duty.

According to the memoirs of veterans, they most often met with detachments… on the front line. When it became especially hot, these units were thrown into battle as a regular reserve. So well-fed and happy sadistic monsters who themselves do not want to fight, — this is an extremely sick fantasy of modern creators.

Penal battalions: how they actually fought and what percentage in parts of the Red Army was

It really was a punishment, and the use of such units on the most dangerous sectors of the front entailed increased losses. But the penal battalion, nevertheless, was not tantamount to death.

The term of stay in  penal units could not exceed three months, and it was also reduced for those who showed personal courage and was marked by command or were wounded in battle. Moreover, there were frequent cases when a fighter from a penal company returned to his unit not only with atonement, but and with a military order on chest.

The penal units were commanded exclusively by personnel officers, who belonged to the so-called “permanent staff”, in contrast to the “variable” & nbsp; & mdash; «penalty boxes». Relations within such units were strictly subject to army regulations, and no mockery of the wronged fighters was allowed. Contrary to the myths from literature and movies, penal companies and battalions were armed with the same small arms as linear units.

You can shoot as many TV shows on this topic as you like, but the facts — thing stubborn: the number of penal units ranged from 2.7% in 1943 to 1.3% in 1945 of the total number of Soviet troops on the front. The fighters who, due to various circumstances, ended up in such units, contributed to the war, but bare statistics testify — the victory was won by «infantry soldier Vanya», as they said in one of the best films about the Great Patriotic War.

Probably, someday the story of Order 227 will get a worthy incarnation in the cinema. But, apparently, for this, the generation of creators, brought up on post-Soviet myths, must change.