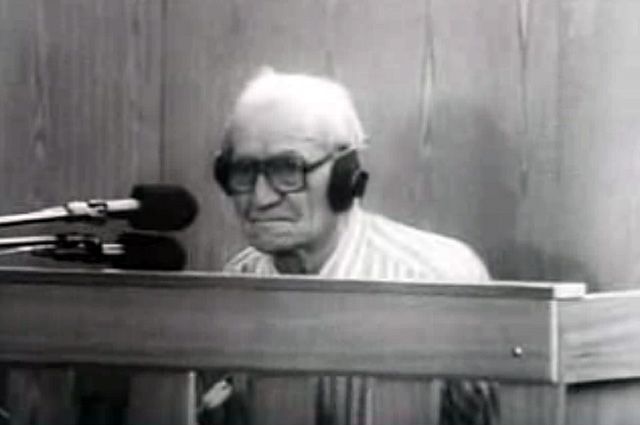 During the years of perestroika, the media wrote with condemnation about the practice of the 1930s, when children disowned their parents, who were declared “enemies of the people.” Pavlik Morozov, previously considered a pioneer hero, was called “a traitor to his father” by the liberal press.

“We do not forgive grievous guilt to our “father”, who disgraced the honest name of Fedorenko. We renounce him, do not consider F. Fedorenko our father, our decision is supported by our mother, Praskovya Vasilievna.

The renunciation of the Fedorenko brothers is stylistically reminiscent of the times of the Great Terror. But this letter was published in one of the Soviet newspapers half a century later. And the reasons for such an act were very weighty.

The Great Patriotic War, a native of Dzhankoy Fyodor Fedorenko met “at the age of Christ”. By the age of 33, he managed to make a small farm, get a wife Praskovya and two sons.

On June 23, after saying goodbye to his relatives, Fedorenko departed for the Red Army. And two months later, Praskovya Fedorenko received a notice that her husband, Fedor Demyanovich, had gone missing in early July 1941.

Millions of Soviet women found themselves in her position during the war years. Praskovya endured all the hardships, put her sons on their feet and continued to believe that one day her beloved Fedenka would return.

And a miracle happened. In the early 1970s, Praskovya Vasilievna received a letter from the United States, written by her missing husband in his own hand. He reported that he was alive and well, he missed him and would like to see you.

And indeed, in 1974 Fedorenko came to his native Dzhankoy. But that meeting did not turn out to be warm. His wife and children could not understand why he had not made himself known before. The father of the family explained that he was afraid to substitute them — they say, organs can be punished for a relative in the USA.

Conversation in the KGB

Fedor generally spoke more about his wonderful life in America, about the flower business, than about what happened to him in the summer of 1941. He answered reluctantly and in monosyllables: he was captured, went through camps, out of fear of punishment he remained in the West.

“Resurrected”; Fedorenko was summoned to the KGB to give explanations about the military events. There he calmly repeated what he had previously told his relatives. And soon departed back to the United States.

In fact, the state security officers knew much more about Fedorenko than he could have imagined. The KGB had records of interrogations of collaborators who encountered Fedorenko in German concentration camps. Where the former Soviet soldier was by no means a prisoner, but a guard.

One of the “herbalists”

Once captured, Fedorenko was sent to the territory of Poland, where he very quickly agreed to cooperate with the Germans. He was included in the recruitment of ethnic Ukrainians who were sent to the special school “Travniki”. The cadets of this Nazi institution from among the prisoners of war were subsequently distinguished by particular cruelty both when working in the “death camps” and when carrying out punitive operations in the occupied territories.

They were nicknamed — “herbalists”. Survivors of the Nazi dungeons recalled this word with horror. And Fedorenko stood out even among the “travnikova” masses of executioners.

He participated in the extermination of Jews from the Warsaw and Lublin ghettos, and in the fall of 1942 Fedorenko was sent as a guard to Treblinka.

The Germans characterized Fedor as a person who carries out any orders with absolute equanimity. Other punishers after reprisals against women and children went into hard drinking, but Fedorenko did not suffer any pangs of conscience. On the contrary, he liked to send people to their deaths.

For diligence and diligence, Fedorenko was promoted to chief watchman of the SS, making him the commander of a guard detachment in Treblinka.

Both surviving prisoners and former colleagues spoke about him. From the prisoners, he received the nickname Black Fedor — for cruelty and absolute composure during executions. He even drove children into the gas chamber with a smile on his lips.

Cherny Fyodor colleagues said that he was a very greedy man who did not disdain anything.

From the testimony of collaborator Yakov Savenko: “We were sitting in the car, talking, when he suddenly discovered that he had lost his wallet with money. He began to accuse me of the loss, I was offended and left, like my companions. As it turned out later, one of my colleagues found this wallet, which contained three thousand Polish zlotys. This is a lot of money, and the fact that Fedorenko takes away jewelry from prisoners and then sells them was known to everyone, even in other camps.

The theft of valuables confiscated from prisoners was considered a crime before the Reich, and not only collaborators, but also true Aryans from the workers of the camp administrations paid for it more than once. But Black Fedor got away with everything — either they forgave him for his zeal during executions, or the trickster shared with whomever he needed.

Be that as it may, in 1945 Fedorenko ended up in the American zone of occupation, from where he managed to leave for the United States. There he told a story about captivity and fear of the NKVD, and that was enough to legalize himself.

Materials about the crimes of Cherny Fyodor were collected not only in the USSR, but also in Israel, where he was included in the lists of one of the most cruel executioners of the Holocaust. By the early 1970s, both groups of Nazi hunters confidently identified US citizen Fedorenko with Cherny Fedor.

Strictly by the law

Why wasn't he taken in Dzhankoy? The Soviet authorities, no matter what they said about them, acted within the framework of legal procedures, and they did not have the right to grab a US citizen. Therefore, after Fedorenko, who had gone back to America, materials were sent to him with a request for extradition.

In 1976, through the efforts of both Soviet and foreign hunters for Nazi criminals, the Fedorenko case reached the American court. At the trial, he did not deny his work in Treblinka, but assured that he performed exclusively auxiliary functions. The judge accepted this position, declared Fedorenko a “victim of Nazism”; and let him go in peace.

However, in the USSR they were not going to leave things like that. A new package of evidence of Cherny Fyodor's crimes was collected over several years, after which it was sent to Washington.

“Nazi lives freely in the USSR”

In 1981, the US Supreme Court, having studied new materials, deprived Fedorenko of citizenship and took him into custody.

But the debate about his future fate lasted another three years. Organizations of Ukrainian emigrants in Canada really wanted to get him sent to the Maple Leaf Country. Moreover, the relations between the USSR and the USA heated up again. However, there were enough people in the Ronald Reagan administration who still remembered who the Nazis were and disdained any connection with them. As a result, at the end of 1984, Fedorenko was put on a plane and deported to the USSR.

And then there was an incident — KGB officers brought the Nazi criminal to Dzhankoy, where… they released him. They had no instructions on how to proceed.

As a result, Fedorenko, having settled in a rented apartment, drank away the currency he brought with him from the United States for more than a month. Upon learning of this, the journalists of the Washington Post published a material entitled “Nazi Fedorenko lives freely in the USSR.” The shame was extraordinary, and measures were taken instantly — the Nazi criminal was sent to a pre-trial detention center and began to prepare for his trial at an accelerated pace.

And Fedorenko continued to open up in all its glory. “I don’t need a Jewish lawyer, find another,” — he declared. Just at that moment, the Fedorenko family wrote an open letter, renouncing Fedor Demyanovich. And wasn't this a natural step for them, ordinary Soviet people? Why should the shadow of the crimes of the traitor and the murderer lie on them, who did not stain themselves with anything?

The trial in the Crimean Regional Court started on June 10, 1986. The hall was packed. Then there were still many living witnesses of Nazi atrocities, and for them Cherny Fedor was the living personification of this evil.

But Fedorenko was tried not for images, but for specific crimes. The materials of the investigation and the testimonies left Cherny Fedor with no chance of leniency. The lawyer also asked to save the life of his client, taking into account his advanced age.

In the last word, Fedorenko shed a tear, saying: “I did not want this.” But no one believed in the sincerity of the words of the executioner.

On June 19, 1986, the judge announced the verdict — capital punishment. Fedorenko this time reacted with absolute indifference. Nevertheless, he used all the possibilities of petitions for a review of the sentence and pardon.

In the summer of 1987, a brief message appeared: the sentence against Fedorenko Fedor Demyanovich was carried out.