The extraordinary summit of the CSTO leaders, convened on January 10 at the initiative of Kazakhstan, looked like an attempt to explain with the world community about the recent events in the republic. However, two main questions – what happened to Nazarbayev and who is behind the coup attempt – remained unanswered. In his speech, Vladimir Putin announced the inevitable repetition of the scenario of “outside interference in the internal affairs of the post-Soviet states” and warned his colleagues about the dangers of social networks controlled from abroad. It is with them, according to him, that the protest actions of citizens begin, followed by attacks by terrorists. 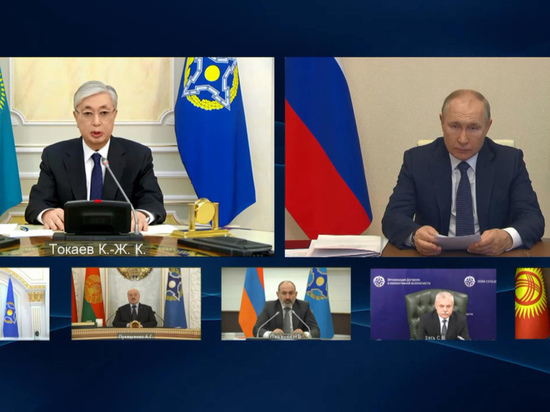 Extraordinary online summit of the CSTO.

The emergency nature of the extraordinary session of the CSTO was emphasized by the time of the start of the summit. The leaders gathered in front of the screens already at 10 am Moscow time, although usually such meetings start no earlier than noon. The President of Tajikistan did not even have time to really establish a connection: once the signal disappeared right in the course of his speech. However, the first to speak was the head of Kazakhstan, Kassym-Zhomart Tokayev, who was clearly impatient to explain himself to the world community about the events taking place in the republic. He still looked very agitated, read out a speech over the teleprompter, but he could not fully cope with the tremor in his voice, which was especially striking against the background of the speeches of other participants. (However, despite the outward calmness, Putin also confused the name of his Kazakh colleague, calling him Kemel Zhomartovich).

According to Mr. Tokayev, Kazakhstan is faced with an attempted coup d'etat and the most severe crisis in all 30 years of its modern history. The leadership of the destructive forces that attacked the republic was carried out from a single center, and all the events that have happened since the beginning of the year are links in one chain. “They are subordinated to a single destructive plan, the preparation of which took a long time. How long – a year, two, three – the investigation will show, ”Tokayev emphasized. It all started with peaceful protest rallies against the rise in gas prices, followed by riots, which “as if on a single command” were joined by criminals, religious radicals, notorious bandits and looters, and then, according to Tokayev, a “hot phase” unfolded – in action “like a huge flock of hyenas” came groups of armed militants, acting according to a pre-planned plan. The head of the republic has no doubts about the participation of foreign terrorists in the aggression – this allowed Kazakhstan to turn to the CSTO for help. “The UN Charter recognizes that each state has an inalienable right to individual or collective self-defense in the event of an armed attack from the outside,” Tokayev emphasized, complaining about a misunderstanding of the situation in the West and promising to present additional evidence of an attack on the republic by international terrorists to the world community in the near future. He explained why the destructive forces chose Alma-Ata as their target, but did not answer the main questions – who tried to organize a coup and how in a totalitarian state the existence of many thousands of “sleeping” cells of militants was possible? All this, according to him, will become clear during the investigation. It is worth noting that at none of the previous CSTO summits, Kazakhstan (unlike, for example, Tajikistan and Armenia) never complained about an external threat (not to mention an internal one). In addition, the republic borders exclusively on friendly countries, in particular, Russia, Kyrgyzstan, Uzbekistan and China.

However, according to Alexander Lukashenko, “a lot of international terrorists have accumulated on the borders of Kazakhstan for a long time”. The same situation, Bat'ka believes, is in other post-Soviet republics – Kyrgyzstan, Uzbekistan and Tajikistan, which especially needs military-technical support, “so that later it will not cost more, as with Kazakhstan.” “We need to improve both the manageability of the CSTO and the forces that we are ready to use. Serious challenges await us in the future, ”Lukashenka warned. Vladimir Putin agreed that the events in Kazakhstan are “far from the last attempt” to interfere in the internal affairs of the post-Soviet states. However, the measures taken by the CSTO “clearly showed” that “we will not allow the situation to be rocked at home” and “we will not allow the scenarios of color revolutions to be realized.” According to GDP, the main source of danger is social networks: they are recruiting terrorists into “sleeping cells”, as well as “attempts are being made to involve our citizens in protest actions that are the forerunner of terrorist attacks.” We need to make sure that such events do not catch us unawares in the future, so that we can resist any provocations, Putin said. According to Dmitry Peskov, the Kremlin does not yet have specific proposals for regulating social networks in the Russian Federation. However, the evil they bring, “must be stopped.” Usually deputies or senators come up with such initiatives: the State Duma is expected to return from the holidays on January 17, the Federation Council – on January 24.

The fate of the Elbasy and the degree of participation of his family in recent events are of interest to both the people of Kazakhstan and the world community most of all. Dmitry Peskov made it clear that Russia is betting on the current president of Kazakhstan, and whether Putin tried to call his predecessor – he is not aware. “For President Putin, the main task was to maintain regular contact with the head of state, with President Tokayev” – this is how the Kremlin speaker answered the question whether VVP worries about where Nazarbayev is now and in what status.